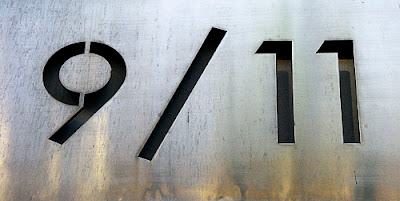 I was planning on avoiding this subject today, not even mentioning it or blogging about it or even thinking about it too much.  But I don't think I can ignore it.  September 11th is a big deal in this country, even twelve years after the event, and most people I know have it on their minds in some fashion.  So here are my thoughts.

In 2001 I was seventeen.  I had just graduated high school & my life wasn't really headed anywhere important.  I was cynical, angry, irresponsible; not too different than a lot of teens, a lot of people for that matter.  And when 9/11 happened I wasn't heartbroken.  It didn't really affect my small existence.  The only changes that I really saw were flags everywhere, IROCs with bumper stickers, and a surge of American pride.  I didn't really feel that proud at the time, I felt jaded more than anything.  So for years I took the asshole approach to that tragedy and any others that followed.

I like to think that I've grown a little bit since that time.  I'm twenty-nine now, I'm married, I have two kids, I'm a responsible guy.  I'm a lot less cynical, or at least a lot less angry, than I used to be.  My first reaction to something is not to call it stupid, to bash it, to knock it down.  I try to look at both sides of issues more now than I used to.  I would say that the greatest lesson I've learned since "growing up" is that there is very little black & white, most everything is gray.  So when the anniversary of 9/11 comes around each year I feel less & less smart-assy and more sad.  Just thinking about all the lives that were lost, the terror that people must have felt who were there or who had family involved, the complete horror involved.  My life remains fairly unaffected and empathy is not one of my strong suits, but I do feel a small amount more compassion than I used to when I was young and even more self-centered than I am today.

That said, and here it comes, I feel like I am in an even better position to judge the people that make a farce out of this anniversary every year then I was when I was angry & judgmental.  Then I was an absolutist who make judgments easily.  Now I try to take in the big picture, but I still find the USA chanters to be completely ridiculous and non-helpful.  A friend wrote on Facebook "Let's all agree to think thrice before sending/ posting/ "Liking" anything 9/11-related that rings of redneckery/ Islamophobia/ boosterism or bumper-sticker design contests." and I couldn't have said it better myself.  It's the people who have turned a tragedy into a circus that deserve the ire of the people.  They did it twelve years ago and they continue to do it today, and that's taking something awful and using it as a tool for their own agenda.  Those people are the ones who lack compassion.

We'll see a lot of 9/11 posts on Twitter, Facebook, and blogs today.  I think the best thing we can do is to remember that it was an actual event, something that affected real people and changed their lives forever.  It wasn't something that should be used to promote your personal beliefs.  It wasn't something you should be high on and using to feel a part of something bigger.  People died, and for some really stupid reasons, ones that we should try to learn some lessons from, instead of turning the entire thing into yet another colored ribbon.
Posted by Olie Coen at 11:24 AM