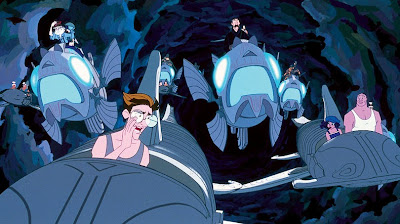 
So I've talked about the Disney movies that I missed because I was getting a little too old for them.  But there's a group that everyone missed because they didn't look very good.  Treasure Planet was one, and Atlantis is another.  They aren't "Disney movies" in the sense that we have come to generalize.  They don't have the patented princess, they don't have original songs, and they're too action packed.  It's not really fair, but we judge them against The Lion King and find them lacking.  I'm not sure what demographic these movies are pointed towards; ten-year-old boys maybe.  But a lot of people let them go unwatched when they came out, and even if they have some redeeming qualities, there's a reason why they weren't popular.

We've all heard the stories of the legendary lost city of Atlantis.  Supposedly it was a great nation, technologically advanced, that was swept under the sea by some cataclysmic event.  Well, Milo Thatch is determined to find it.  He desperately seeks aid in finding the ancient land, only to discover that a team of experts has already been formed and prepared to find it.  Milo joins the crew as the linguist, but he's in over his head, and he doesn't know exactly what is going on.  The explorers find the lost land, but it's not uninhabited, it's populated by a people who have forgotten their once proud past.  Milo must uncover the secrets of Atlantis to make the expedition a success and to save the land.

Meh.  It was alright, but I'm just not that excited about it.  I guess that's the reason no one really saw it when it came out and why it's not respected as a great Disney movie.  It had some good parts; Fox was good as Milo, the bumbling scholar.  Garner was good as Rourke, the hardened veteran.  But the movie was a little messy.  Nothing made perfect sense, and if I was often confused I wonder what a kid would think.  There were even subtitles.  I mean, that's a cool way to introduce children to foreign films, but was it really necessary?  There was a lot of action, some fire fights, and strange robots that didn't really fit into the story.  And it wasn't a musical, so the songs couldn't cover up the flaws.  I enjoyed it somewhat; it wasn't any worse than most action movies.  But I missed the Disney elements that I have come to love, and I was left entertained but disappointed.