Movie Review - To Rome with Love 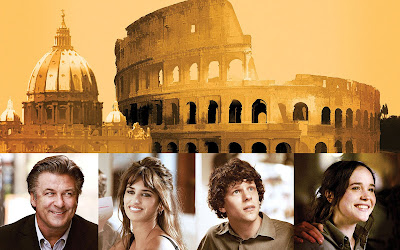 
I love Woody Allen movies.  I'd have to say that he's in my Top 5 favorite directors.  His style of neurotic comedy gets me every time.  And the way he can paint a portrait of a city is amazing.  You can tell how much he loves New York, especially in Manhattan, which I think is his best work.  But you can also see his talent for capturing other cities in a movie like Midnight in Paris, a film that I really didn't like.  It was too fantastic, too weak, and it left me feeling disappointed.  I had hopes that To Rome with Love would be more like the former and less like that latter.

Various non-connected stories are occurring at the same time in Rome in this movie, all pertaining to love, relationships, aging, and life in general.  A retired opera director stumbles upon a talented but shy singer when his daughter falls in love with an Italian.  A young architect meets his inspiration and then meets the crazy girl of his dreams.  A newly married couple go on separate adventures on their honeymoon where temptations abound.  A normal man finds his life turned upside down by sudden fame.  These stories showcase life is Rome, a vibrant and beautiful city where love happens suddenly and heartbreak follows just as quickly.

Woody Allen has a great eye, and he shows that here by creating a wonderful backdrop for his film.  The city and the country are both excellently displayed and you immediately long to go there.  But that was, unfortunately, the best part of the movie.  There was a strange and unbelievable quality to the story that I found hard to accept.  It had a lot to say about fantasies, dreams, hopes, regrets, but that's not what I wanted.  I wanted a wonderful Woody Allen movie; I didn't want Midnight in Paris 2.  That said, there was nothing horrible about the film; the acting was fine, the pace was quick, the music was nice.  But I found myself dissatisfied at the end, wanting Manhattan or Annie Hall, not Match Point or Scoop.  Now, maybe this one wasn't as bad as those, but I guess it was somewhere in the middle, in no-man's-land between great and awful.  But that's not where you want to be.