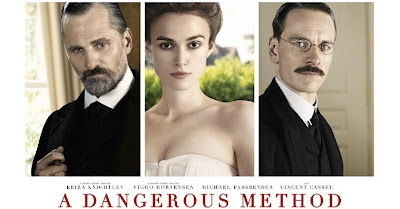 
I never really knew much about Michael Fassbender, but he's quickly becoming one of my new favorite actors.  With early roles in 300 and Hunger, and then Inglourious Basterds and Prometheus, he's showed some good range and a knack for being believable.  He must be popular right now, because he's soon to be in 12 Years a Slave and The Counselor.  Anyway, he's a good actor and I was excited to see him play someone as interesting as Carl Jung.  Viggo Mortensen and Keira Knightley I'm not so in love with, not to say that they're bad actors.  But it was Fassbender I wanted to be featured in this film; he was and he did an amazing job.

This is a true story, a look at the life of psychotherapist Carl Jung; his methods, his mistresses, his mentor.  Jung was a follower of Freud and his analytical approach to psychology.  But he believed there were answers out there that were not physical, that not every emotion stemmed from sexual drive.  In his research he met the beautiful Sabina Spielrein, a troubled woman with strange appetites.  The two became lovers, playing a dangerous game of transference between doctor and patient, ultimately creating a situation that was impossible to keep secret.  As Jung attempted to define his new theories, he could not stop his personal life from impacting his legacy.

Michael Fassbender did not disappoint.  He was excellent as Jung; professional yet troubled, careful yet unpredictable.  The story itself was extremely interesting, if you care at all about the history of psychology.  Seeing these pioneers come to life was pretty cool, and the time period was well represented.  Viggo Mortensen did a find job of playing Freud; I quickly forgot it was Viggo, which is good because he's not always been the best actor.  Keira Knightley was a little off-putting at first, going over the top quickly and only later pulling herself back.  She didn't ruin anything though, and perhaps she meant to go wild and make the audience a little uncomfortable.  The film was uncomfortable at times, but the subject matter was intense and explicit, so that shouldn't come as a surprise.  It was a good film, very interesting, and well done.