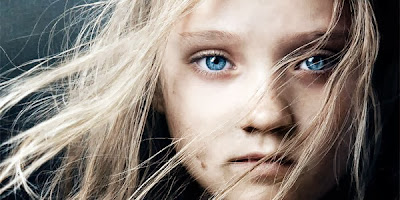 
Can I assume everyone knows a little bit about the show?  I did, even before I saw it, and I assume the same is true about you.  I had heard a few of the songs, knew about the Victor Hugo novel, was aware of the Broadway hit.  But I had never read the book, listened to the soundtrack, or seen the play until a few months ago.  My wife & I saw the show and it was incredible.  The music, the story, the characters; one of the the best musicals you will ever see, assuming it's done with any amount of talent.  Well, I'm a movie guy first & foremost, so I was looking forward to seeing the film version that was so popular and comparing it to the play.  I'm glad I saw it on stage first, because without that knowledge I might have thought the movie was amazing.

The plot of the movie follows the plot of the play almost exactly, while the play follows the book very well minus a bit of philosophy and history.  The story follows Jean Valjean, a thief who has been in chains for 19 years for stealing a piece of bread.  When he is finally released, his past follows him wherever her goes, keeping him from honest work and in hunger.  He stumbles upon an opportunity to start over, a chance to rid himself of his old name and begin a new life, although one that must be kept secret forever.  Fast forward through the years to Valjean the rich man, free of his past, but constantly hunted by Inspector Javert, a man who cannot forget the criminal who escaped him.  When Valjean saves a man from being crushed and befriends a prostitute named Fantine, the game is up and Javert is ready to capture his enemy.  But Valjean has more he must do, as he has promised to take care of Fantine's daughter Cosette, raising her as his own child through the years and through the ever-changing political tide of France, taking the story to its epic climax.

It's hard to summarize the plot, as it introduces countless characters and historical undertones.  It ranges through a great number of years & covers a lot of ground, but always stays with Jean Valjean and his quest to be a righteous man despite a difficult past.  So the story might be a bit confusing at times, but in the end the details really don't matter.  It's a tale of young love, of promises, of heroism, and it is told very well in this film version.  It's the music that tells the story more than the actors, since almost no words are spoken, only sung.  So everything hinges on the vocal prowess of the singers, and thankfully everyone held their own.  Jackman was a great tortured Valjean, Hathaway had a very strong song, and even Crowe wasn't awful as Javert.  The young actors Seyfried, Redmayne, and Barks were all good as well as Cosette, Marius, and Eponine.  So the movie was very well done, well sung, and enjoyable.

However, having seen the play recently, I can say with confidence that the movie is nowhere near as good as the stage version.  There's nothing glaringly bad about the film; the production is good, the sets are cool, the pace is nice.  But it's basically like watching the show from the front row.  Nothing is new or original or different, it's almost exactly like the play.  The only difference is that the actors can't sing as well as the Broadway stars.  So you're basically just watching the play on your TV and hearing second-rate singers.  I'm not saying I didn't like the movie; I liked it a lot.  But there wasn't anything special about it, there wasn't anything that made me glad that I saw it as opposed to the play.  I like that they didn't go all Hollywood and that they kept it simple.  It was refreshing to just follow the characters closely and hear them sing.  It's just that they're not amazing singers; I guess that's why they're in movies.  So, if you've never seen the show or heard much of the music I can understand how the movie might seem spectacular.  But it's not; the music is spectacular, the story is amazing, the characters are excellent.  The credit can't go to the film for something they're copying almost detail by detail.  Watch it and enjoy it because it's very good, but understand that Anne Hathaway is just singing a perfect song that's been sung a thousand times and most often better.