Movie Review - The Best of Times 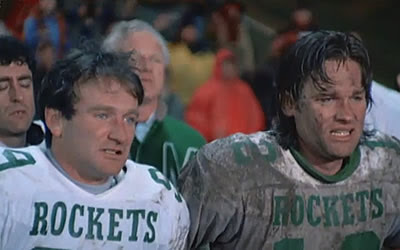 
A quintessential sports movie starring two actors who were in their prime; sounds like a pretty good set up.  Kurt Russell was a heartthrob at the time, though he hadn't emerged as a "star" yet.  And Robin Williams was done with Mork & Mindy, ready to make the leap to full-time movie actor.  They teamed up in this film, the hunk and the funny guy, and it would go on to become a sports classic, complete with pep talks, Hail Marys, underdogs, and physical comedy.  Sounds alright and I figured it was a must-see.  Well I saw it, and now I kind of wish I hadn't.

The story takes place in the city of Taft, California.  Football has been important there for generations, and no quarterback was ever better than Reno Hightower.  Unfortunately, in the final game of his career his mighty game-winning pass was dropped by bumbling backup wide receiver Jack Dundee.  Reno & Jack are all grown up, still live in Taft, and have never forgotten that fateful day.  In order to make amends with the past and to fix their broken marriages, Reno & Jack stage a rematch with the same team & players that beat them all those years ago.  Reno wants another chance at glory, while Jack just wants to catch the ball this time, defeating the demons that have haunted him ever since he became the guy who dropped the pass.

I tried to appreciate the movie on a sports classic level.  It had all you could ask for and all that has been mocked & copied ever since.  So in a way it deserves some credit.  But other than that it was pretty terrible.  Kurt Russell isn't a good actor, never has been, and he couldn't really pull off the meat-head QB whose real passion is van painting.  And Robin Williams wasn't very funny as the messed up banker who can't live down his failures.  Then the guys try to revitalize the town and things just get awkward.  It wasn't really entertaining, it wasn't heartwarming, and it never really went anywhere.  I felt bored more often that not, and that's coming from a football fan.  All in all, The Best of Times is no Rudy, and doesn't deserve a rewatch.