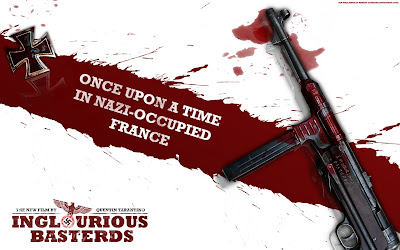 
I, like most of you, have seen a ton of Tarantino movies.  You can't talk about one of his films without talking about other ones because they all have a similar style.  I'm not saying that they're all the same, far from it, but you can definitely tell a Tarantino movie when you see one.  He just has a way of bringing bloody humor & intense action to a story that's just so original and well-orchestrated.  Even if you don't love his work, you've got to admit that he's a force and someone who has put his stamp on cinema.  So going into Inglourious Basterds I'm automatically thinking about the other ones that I've seen.  The crime genre (Reservoir Dogs, Pulp Fiction, Jackie Brown), the revenge plots (Kill Bill, Django Unchained).  All good movies, some even great, but none as excellent this film, the best Quentin Tarantino film that I have seen.

The story is set during WWII in France, where the Nazis have complete control.  We begin to meet the cast of characters, a group that will eventually come together and affect each others' lives.  Hans Landa, the Jew Hunter, a German officer in charge of finding hidden secrets.  Aldo Raine, the leader of the Bastards, a group of American soldiers whos mission is to kill Nazis.  Shosanna, a Jewish girl who barely survived her family's murder, now the owner of a French theatre.  Archie Hicox, a German-speaking Brit who is going undercover.  And Bridget von Hammersmark, a German actress who is also a double-crossing spy.  These characters are each influencing the war in their own way, and will meet at a movie premiere where plot after devious plot is revealed, sprung, dismantled, and abandoned, as the climax draws near and the history of Europe is decided.

As with other Tarantino films, there are certain things you can expect.  A ton of blood, a good bit of quirky humor, and some long uncomfortable scenes that feel a little too real.  Inglourious Basterds does not disappoint, as it delivers everything you want from this director and leaves you cinematically satisfied.  However, what makes it the best Tarantino film of them all is the era.  It's not so much better than all his other movies, but the time period lends itself perfectly to the style of his movies.  Here is a time in which bloody murders were commonplace.  Here is a time where revenge, subterfuge, and stupidity ran rampant and order disintegrated.  Here is one of the most influential times in world history, and it seems like it was made to be shown to us in a Tarantino way.

And that's not even the best part.  The key to this being such an amazing film is Christoph Waltz.  I saw him in Django before I saw him in Basterds and I thought he was really good in that.  But wow was he amazing in this.  He was the perfect villain; utterly detestable but oddly likeable.  No one could have played the part of the crafty killer better than he did; he was the Jew Hunter, he made me believe that he literally took pleasure in orchestrating the murder of these people, all while being funny, witty, and extremely polite.  The other actors in the film were strong as well; Brad Pitt as the comical American, Melanie Laurent as the escaped Jew, Michael Fassbender as the pompous Englishman.  None of them compared to Waltz, who stole the show, but they all helped to solidify an incredible film that showcased Tarantino's talent like nothing has ever done before.  You've got to like his style, and you've pretty much got to like WWII, but if you do than you've got to see this movie.