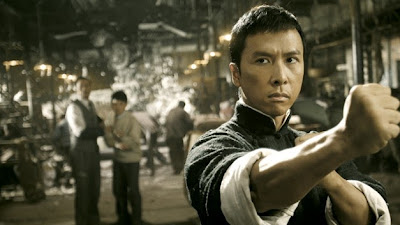 
I don't often watch kung fu movies, or any martial arts movies for that matter.  I've seen some Jackie Chan and Jet Li films before, but that's about the extent of it.  I'm not even sure if I've ever seen a Bruce Lee movie before.  But Ip Man was recommended to me and I thought I'd give it a shot.  This is a mostly true story, and incidentally Ip Man trained Bruce Lee, teaching him the art of Wing Chun kung fu.  So a biography set in an interesting time about a cool subject.  I figured it would be good if not great, and that's exactly what it was; a film that was perfect at being one thing, even if that one thing isn't necessarily my thing.

Ip Man was a master in the art of kung fu.  Living in China in a province known for its martial arts, he was renowned for his knowledge, though he didn't teach his style to others.  Challenged by students as well as masters, Ip Man remained partially aloof and uninvolved in the constant battle for dominance in the field.  All this would change during the War, when Japan invaded China and their culture was shattered.  Known as a great fighter, Ip Man was challenged continually by the occupying Japanese general, while all he wanted was a good life for his family and peace for his friends.  In a final confrontation, the best martial artist from China goes up against the best from Japan in a clash of countries that will inspire a nation.

The movie was pretty much what I had expected.  It was a kung fu movie, with a ton of fight scenes, rapid punches, flips, kicks, tricks, a little humor, and ultimately a message delivered through an art form.  I enjoyed it for what it was, and I was glad it wasn't as fantastic as Crouching Tiger, Hidden Dragon or others in that genre.  It turned out to be pretty realistic, interesting, and entertaining.  That said, it's still not my thing.  The acting and characters are not really the focal point in movies like this, and tend to be sub-par.  You have to look past that in order to enjoy the film, and that's fine, but then sometimes you're forced to remember that the lead is a great athlete, not a great actor.  Ip Man was a well-made kung fu movie, so if that's your thing I doubt you'll be disappointed.  If you're like me though, it's still a cool film, just not something you'll fall in love with.