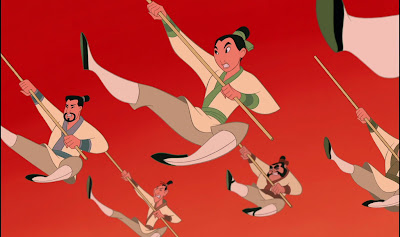 
This is one of those Disney movies that I missed when it first came out, like Hercules or Pocahontas.  Or maybe I was just getting a little too old to watch Disney movies anymore.  Whatever the reason, I'm just old enough to enjoy watching them again; I guess having a four-year-old daughter doesn't hurt.  But I'm glad to go back and catch up on the classic animated movies that I missed.  Some of them are just alright, but others are surprisingly good.  Mulan is one of the latter, a movie that I knew by the music but never imagined it would be as fun to watch as it ended up being.

The story of Mulan starts with the invasion of China.  The Huns have crossed the Great Wall and in so doing have started a war.  One man from every household has been called to arms to defend his country.  In the Fa family, the only man is the pater familias, but he is old, injured, and sure to die.  So his daughter Mulan takes his place.  She has never been graceful or a good match, but she is brave, intelligent, and forms a plan that will allow her to serve where only men can; to don her father's armor and pretend to be a boy.  Mulan must train hard and learn fast to become a soldier and help the Imperial Army defeat the dreaded Huns.  There to help are a lucky cricket, her trusted horse, and a tiny dragon who was once a Fa family guardian.  The team must work together to keep Mulan's secret and save China.

The story was actually kind of cool.  It's not something you see in Disney movies very often, it was more of a plot from an actual movie.  And that's what struck me; that this could be a real film.  They would have needed different actors though.  I know voice-over people are a whole other breed, but some of the characters were painfully done.  Mulan in particular was very badly acted.  I didn't actually mind Eddie Murphy as Mushu the dragon; he was silly but acceptably so.  The music was what made the movie though.  We all know Christiana Aguilera's version of 'Reflection', but the version in the film was much better.  And other songs like 'I'll Make a Man Out of You', 'Honor to Us All', and 'A Girl Worth Fighting For' were all very strong, catchy, and appropriate.  Mulan was a solid movie with a good story, nice music, and a little bit of kiddy comedy that was all blended together quite nicely to make an enjoyable experience.