Movie Review - Into the White 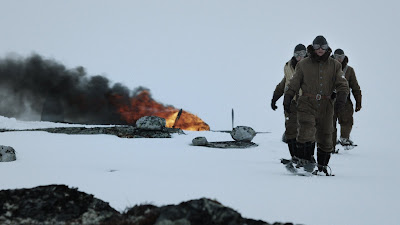 
Into the White is a film out of Norway.  Have you seen a lot of those, films out of Norway?  Me neither.  But I was intrigued by this one.  First, there are three languages spoken in the movie: English, German, and Norwegian.  That was interesting all by itself; culture clash in the snow.  Secondly, I love WWII movies, even though this one isn't the kind that we're used to.  And lastly, I don't know the two main actors, but someone was very smart when they added in Rupert Grint (Harry Potter) and David Kross (The Reader).  Those are movies that I've seen and helped catch my attention.  So, on we go, let's see how they make movies in Norway.

Set during World War II, the story begins high in the frigid Norwegian mountains.  British & German pilots fly over this territory frequently, vying for control of what could be a highly productive source of raw materials that could tip the scales of war.  When a German plane is shot down, the surviving soldiers must quickly find shelter or die.  They soon find a snug hunting cabin, settle in to resupply, and make plans for rejoining their army.  But trouble arrives in the form of two English airmen, also shot down in the same dogfight.  The armed Germans immediately take the Brits captive, declaring them prisoners of war.  The two groups instantly hate each other, but soon find that not only do they have much in common, but that they are going to need each other in order to survive.

Looking back, the plot sounds a little silly; enemies meeting in a hostile environment, forced to work together, and learning lessons.  Why can't we all just get along!?  But while watching the film it didn't feel exactly like that.  The plot was actually based on a true story.  So it might seem a little coincidental, but it happened, and the "lessons learned" might have happened too.  After all, soldiers aren't robots, they're human, and when you're forced to accept that your enemies are humans too perhaps you begin to see things differently.  I don't know, I've never been trapped in a cabin with someone I hated.  Putting the story aside, the rest of the movie was just OK.  The acting was suspect, the bonds formed were a little cheesy, and there really wasn't much action for an action movie.  In the end, the film became about humanity, harsh elements, adaptability, friendship.  And although it wasn't perfect, I found myself really enjoying it.  I would recommend it to anyone who likes POW camp movies, WWII, survival films, that kind of thing.  To the rest of you, you might want to just let this one go; you're not missing too much.