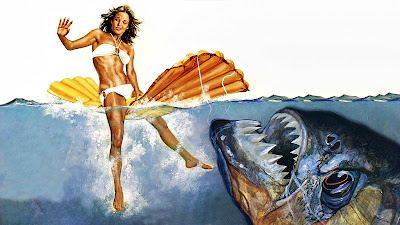 
You know how I love a good b-movie.  There have been so many versions of this movie made that I had to see the original.  There was the made-for-TV version with Mila Kunis and Soleil Moon Frye, the sequel, the remake with Elizabeth Shue.  That's a lot of movies about such an improbable subject.  So I watched the first one because I figured it was my duty, and I realized I had seen it before.  That doesn't happen to me very often, forgetting that I had seen a film.  Maybe I watched it late at night as a kid or something, probably when I wasn't supposed to.  I was negative five when it came out, so I'm really not sure, but a ton seemed familiar as I watched it.  Anyway, it was nice to be reacquainted.

Apparently the military likes to keep abandoned genetic warfare plants hidden deep in the woods with most of their experiments still alive and under-supervised.  And when two young hikers go missing, the two unlikely companions that begin searching for them stumble across the site & accidentally release an unknown danger into the local waters.  A new strain of piranha is now on the loose, one that can live in fresh or salt water, cold or warm climates, eating & breeding their way to total dominance.  The people of the area are in trouble, and only the pair that accidentally set the plague free can stop it in time.

Wonderfully bad in every way; a great b-movie.  From the teens deciding to go skinny dipping in a barbwire-surrounded death tank to the hundreds of people having their legs bitten off by a million razor teeth, Piranha was everything I had hoped it would be.  And pieces kept coming back to me, so it felt like a visit with an old forgotten friend.  There was a lot to like about this movie; the over-acted dramatic dialogue, the bloody remains of fish food, the random boob exposure.  Of course, it was all utterly ridiculous, but that's what makes a b-movie great.  You can't take yourself seriously and be a good bad movie, you've got to be able to laugh at yourself.  It wasn't the best I've seen, but it definitely deserves cult classic status and ought to be enjoyed by fans of this genre.