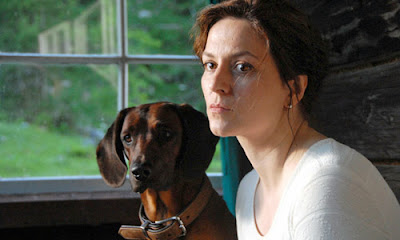 
I'm going to reference a movie & a TV show that have very little in common with this film.  One is The Cabin in the Woods and the other is Under the Dome.  Now, the first is a horror film that I found pretty amazing due to its perfectly typical plot but wonderfully original twist.  The second is an excellent Stephen King novel that got turned into an awful mini-series.  Neither have too many similarities to The Wall, except for one detail that sets the stage for all three; containment.  In all of these works, there is an inescapable shield/dome/wall that appears suddenly and forces the characters to work within the confines of their new world.  The idea is fairly fascinating, a physical barrier that forces the action to occur within a small space.  You can see how writers would be pretty taken with this concept, creating stories in various genres that all deal with a similar theme, while making the end products completely different.  So going in I was curious to see how this story would be similar to the others, and in what ways it would hopefully be original.

The story begins in the Austrian Alps; beautiful countryside & beautiful weather.  A woman has accompanied her two friends to a secluded hunting lodge to spend part of the summer.   There is a village nearby and a few scattered farmhouses, but the valley is peaceful & remote; the perfect place for a getaway.  Other than the three humans the only other occupant of the cabin is Lynx, a gorgeous dog who is both loyal & kind.  Upon arriving at the lodge, the couple decide to take a walk to the local pub, leaving the woman & Lynx behind.  They settle in for the evening, but are surprised in the morning when the pair have not returned.  Worried & confused, dog & new friend head out down the road toward town & assumabley toward answers.  But their trek is stopped short by something incredibly unforeseen; a wall.

This invisible barrier blocks their path & has no apparent end.  It seems ridiculous, but there is something solid yet perfectly transparent that keeps the woman & her dog from going forward.  And when they begin to search, they find that the wall extends for miles, completely cutting off the little valley from the rest of the world.  The only occupants outside that can be seen seem to be frozen in time, standing as still as statues while the natural world continues to exist around them.  At first the woman holds out hope of some sort of rescue, but slowly she begins to realize that she is utterly alone, with only a dog for company.  To survive she must form a relationship with the land that she has never fathomed before, a symbiotic bond with nature that is her only way to keep hold of the sanity that threatens to leave her if she doesn't grip it tightly.  The appearance of more animal friends helps; a cow, a cat, a crow.  But as the years go by, her loneliness becomes a tangible thing and her miniscule world becomes her captor. 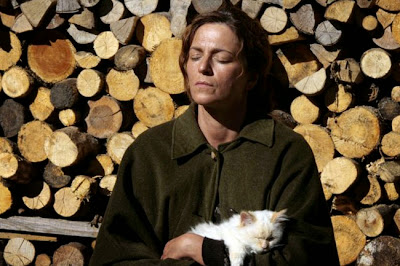 The theme of the film is very interesting & is the best part of the movie.  The idea of total isolation is fascinating, and we get to see the life of one person as she lives under our microscope.  This land that she lives in is her sole existence and she becomes tied to it in a very remarkable way.  Her relationship with animals and the natural world are both heartwarming & heartbreaking in ways we can all relate to.  But the deeper meanings beneath the surface of the plot become the pieces that you really think about, and the film gives you many opportunities to think about them.  First there is the why; what happened, what's going on, was she chose, is this random.  And when the answers don't come we begin to question the metaphors; man/nature, self-isolationism, god/control.  And of course the answers to those concepts don't come, and so we're left wondering what the film means, what it is trying to tell us.  And that, for me & I'm sure for many others, is one of the things I enjoy most about a great story.

The film is based on the 1963 novel Die Wand written by Marlen Haushofer.  I'm sure the same allegorical ideas come up in the book and I'd be interested to see if it holds more clues as to what the author intended to portray by putting a woman behind a wall.  There was a definite god-like element to the way she cared for, loved, and yet felt trapped by the animals in her life, these creatures that she was responsible for in a very real way and also needed in her life.  Was she meant to represent a superior being, or was she meant to show us our own ties with nature, the Earth, and the blind eye we often turn to the invisible impact we have on the planet?  Perhaps these questions can be answered more easily in the book, or perhaps the author leaves it up to our interpretation, but the movie only offers so many clues.  If you enjoy thinking through a one-hundred minute film & leaving with no closure than this is definitely a film for you.  If not, then you've been warned.

But setting the depth aside and judging the movie as a movie, there isn't a whole lot to grab on to.  After the initial kick start of the plot, the action dies down considerable and at times can become a little boring.  The woman, as she is referred to, is almost the only character in the entire picture and shows us just barely more emotion than Lynx the dog.  Her narration is bearable but not great; she is a German actress speaking in English and relating the way she feels as she farms, walks the woods, and slowly settles into a deep depression.  So there isn't much excitement or amazing acting that comes out of this film.  That's not really the point of the story I guess, and perhaps I'm being hypocritical by wanting more Hollywood when I always say that I hate Hollywood, but I could have done with a little more meat to the story, a little more passion from the lead.  That said, I found the concept to be an interesting one and was left thinking about the film long after it was over.

Video - With an aspect ration of 2.35:1, the video quality is excellent.  The film was shot using Moviecam cameras and a Red One MX.  The picture is great, with beautiful outdoor shots and stunning landscape scenes.  The film lends itself to some stunning visuals and the quality is there to support it.

Audio - The film was done in Dolby Digital with some interesting audio options.  The default setting is for German language in the beginning with English subtitles.  When narration occurs, the audio switches to English with no subtitles.  The choices on the disc are between 5.1 English or 5.1 German, with the option to turn on English subtitles.  The sound quality of the film is great, having a very nice balance between narration and live action. 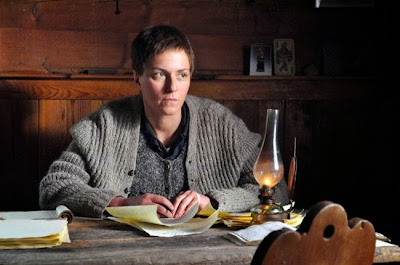 Rent It.  This is definitely a film that elicits some deep thinking.  It's fairly easy to watch & interesting, but you're left with incomplete answers and the knowledge that you might not ever know what really happened.  If that's fine with you than The Wall is a quality film that delivers a fascinating story.  The video quality is high, as is the audio, but the extras are limited.  Not a film for everyone perhaps, but one that has its place & will have its followers.