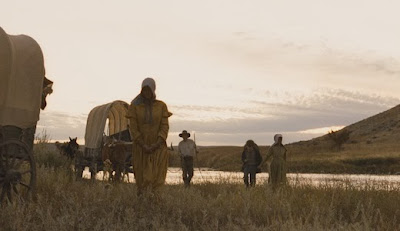 
I wasn't sure what I was getting myself into when I sat down to watch this movie.  I knew generally what it was about and I enjoy a good western, so that part didn't worry me.  And I also know & like these actors, especially Williams and Dano, so I wasn't too concerned about the acting either.  But this is a film that went far under the radar, that gets a low rating from audiences, but that the critics seem to love.  Disparity between the public & critics always puts me in a tight spot because I am both & try to write my reviews as such.  I want to dissect movies & talk about their problems, artistry, background, etc.  But I also want to be a normal person and discuss entertainment value & the fun of movie watching.  Often I find myself right in the middle when a movie is received like Meek's Cutoff was, and this time was no exception; I liked it as a fan, I liked it as a critic, but it didn't really excite me one way or the other.

If you ever played the game Oregon Trail as a kid then you have a bit of background on this story already.  A group of pioneers are heading west along the Trail, attempting to reach the fertile valleys that lay beyond the Oregon deserts.  Three families bring their wagons & their hopes on the adventure, hiring a guide named Meek to lead the way.  When we first enter the story, the group is already lost.  They know that they're close to their destination, but they don't know exactly how to get there and supplies are running low.  Tensions are high and patience with Meek has about run out, when the group capture a local native who might be able to tell them where water is.  Attempting to break through the language barrier and questioning their own judgement on keeping a savage in their midst, the group presses on towards what they hope is paradise.

I can see why opinions vary of this film, why audiences didn't really like it & why critics did.  It's a very original take on a classic storyline, to be sure.  We jump right into the story with no history and no characterization.  We are forced to figure out what is going on, to become acquainted with the travelers, and figure out the mood of the film with not much help from the director or the actors.  That's not to say that they did a bad job; the acting by all involved was great and the scenes were beautifully done, but most of the work was left to the audience.  I don't mind putting in some effort to enjoy a movie, but I know some people do.  Add in slow, unlit scenes that seem very real but not very accommodating and I can see a lot of people giving up on what must be, to them, a very boring movie.  I didn't find it boring, but I also didn't find it as genius as some critics did.  So again, I'm right in the middle; not a film for everyone because of the sensationalism & the stark dialogue, but also a movie that is artistically enjoyable if you like that sort of thing.