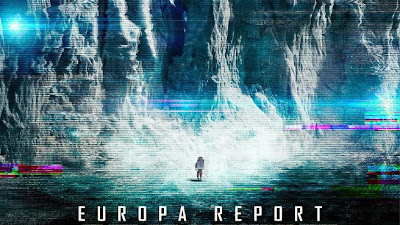 
I was one of the few who thought that Prometheus was great rather than good.  I thought it was a perfect homage to the sci-fi genre and a wonderful representation of the Alien series.  Now, it was a little Hollywood and perhaps a little overworked, but it was an entertaining ride that wasn't stupid and wasn't forgettable.  But for those who didn't love it, who want their space flicks to be gritty, realistic, minimal, then have I got a film for you.  Europa Report is a sc-fi movie made for those who don't want blockbusters but also don't want crap.  It follows the classic guidelines but doesn't fall into the trap of being typical.  Not many movies can say that, regardless of genre, and it's refreshing to see a new take on an old premise.

It's a new era in space exploration and corporations have taken over.  The newest venture is the Europa project, an attempt to reach & explore a moon of Jupiter.  The goal is to further explore the idea that there may be water deep under the ice of the surface, that life might be possible there, and that it could shed light on the great questions of life.  A team of astronauts, doctors, and experts are sent on a mission that will take years but that will be broadcasting their thoughts & their results all the while.  But when communications are lost & tragedy strikes the crew, the connection between the spacecraft and the Earth base is lost and the Europa team find themselves on their own.  Once they reach the moon, they must make difficult decisions, risking their mission, their findings, and their lives.

What this movie has going for it is that it's not your typical flick.  It's set up so that all the action is recorded on spacecraft cameras, so we're seeing what the people on Earth are seeing; recorded video & real time security footage.  This immediately makes the story believable & interesting, as if the audience is along for the ride in what turns out to be an intense journey.  The acting supports the plot fairly well, though no one is outstanding.  Everyone does a fine job of coming off as genuine & like the moment is bigger than they are.  Put together, the minimalist concept & the simple acting work well together and make the whole story pretty ingenious.  Some might not like the ending, but it's hard to please everyone with the finale of a intriguing film.  I didn't mind it, I thoroughly enjoyed this film, and I would recommend it to all sci-fi buffs.