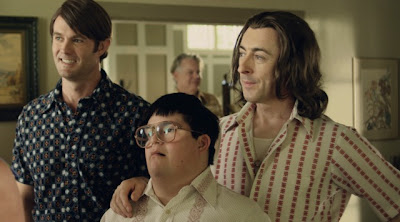 Rudy is a gay man making his way in 1970s show business.  He's only made it as far as dressing in drag & lip syncing, but he doesn't let that ruin his positive outlook on life.  And that energy is what draws Paul to him, a closet homosexual trying to start a new life after a divorce and a new career as a lawyer.  Rudy and Paul are just starting their relationship when something happens that will change both their lives.  Rudy's neighbor abandons her son Marco, who has Down's Syndrome.  When she is arrested & taken to jail, Rudy petitions to become Marco's guardian.  But he & Paul's budding relationship stands in the way of full custody, as the courts will not allow a gay couple to raise a child, fearing for their safety in a "deviant" home.  But Rudy has never given up on a dream without a fight, and his new-found love for Marco makes this a dream worth fighting for.

The plot might sound a little cheesy, with a lot of emotional triggers thrown in just for fun, but it's actually based on a true story and was very realistic for the time period.  The social issues touched on by this film are fascinating, even more so for being real, not Hollywood produced.  The story is heartbreaking, be forewarned, but the importance of the message cannot be understated.  Denying what is obviously best for a child based on irrational beliefs is nothing short of criminal, and we can hope that our world has changed for the better in part due to the tireless effort of people like these characters who fought for what was right.  But the issues aside, the movie featured some excellent acting, especially from Alan Cumming.  He was tremendous; believable, confident, funny, exposed.  And basically he carried the film, with Garret Dillahunt the solid backup player.  The film used empathy to grab the audience and not a ton of perfection, but it was good enough to deserve forgiveness for its obvious emotional ploys.  A great movie with a great actor and one that you'll still feel long after the credits roll.