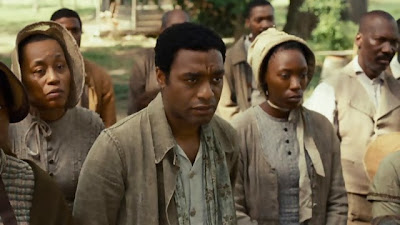 
No other movie is getting as much Oscar buzz as 12 Years a Slave.  It seems tailor-made for a Academy Award; period piece, dramatic, social issue, big name actors.  In past years this film would have been a shoe in to win Best Picture and probably Best Director as well.  But in today's Academy, any movie can win.  They've expanded the list of nominees from five to nine or ten, including many genres that aren't usually there.  This year, it seems that there might be a couple films that could give this one a run for its money: Gravity, American Hustle, and perhaps Inside Llewyn Davis.  I might not have liked Gravity much, but that doesn't mean the Academy didn't, as they seem to be tapping into public opinion more than they used to, giving credit to entertainment as well as drama.  But if I had to put money on it & before a few contenders have even come out, I would have to say that 12 Years seems to be the front runner.  And apart from This Is the End, which I thought was hilarious, it's the best movie I've seen all year.


This is the true story of Solomon Northup, an African American man living a free life in New York during the years before the Civil War.  He lives there with his wife, two children, friends, is well off, and has all a man could ask for.  The unthinkable happens when Solomon travels with two men to Washington D.C. under the guise of being hired to play his fiddle; the men drug him & sell him as if he were a common slave.  Overnight Solomon's old life has vanished.  He is now called Platt, taught to forget his privileged background, and sold into bondage.  Over the course of years, Solomon has many masters, meets many slaves, comes to understand the Southern world in which he involuntarily lives, and yet somehow never gives up hope that someday he will be a free man once again.  His determination to live and to keep his humanity in tact creates conflict wherever he goes, but he survives with what dignity he can, accepting the goodness from some and the terrible treatment from others, staying alive no matter what the cost. 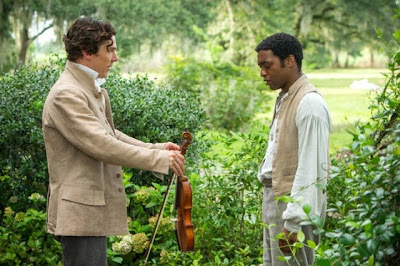 12 Years a Slave is one of those films that is hard to watch.  It's so powerful and so very real that it's sickening in its brutality & truth.  It's not unbelievable that man can be so cruel to other men, but it's difficult to see this vile treatment right before our eyes, to feel the torture and experience the pain of loss; loss of life, loss of family, loss of self.  It's almost hard to call this film "good" or to claim to like it, as it shows us mankind at its worst and makes no attempt to cover up a terrible story with fake heroics or lessons learned.  There hasn't been a film as harsh as this since Amistad, another story of slavery, but one that wasn't as excellent a movie as this one is.  Amistad was not nominated for Best Picture and I'm sure 12 Years will be.  Not only because of its great & compelling story, but because of the way that story was told; quietly at times, often loudly & uncomfortably, and even beautifully at certain moments.  It had great music underscoring the action, excellent cinematography, a light director's touch, and some wonderful acting.

Chiwetel Ejiofor was very strong as Solomon.  He played him with perfection, giving us a character who was both completely lost & also surprisingly resolute, a man who was a hero in a very vulnerable way.  He deserves a nomination for his role and I would be surprised if he wasn't up for Best Actor.  Michael Fassbender also did an excellent job with his part.  He played a religiously unhinged plantation master so wickedly that he became the epitome of all that was evil in that world, all that had to change in order for men like Solomon to live freely.  I would perhaps be pleasantly surprised if he were nominated for Best Supporting Actor, but it would be a deserved award.  Past those two men, the side characters were either fine, unnecessary, or just plain bad.  Benedict Cumberbatch was solid, Paul Giamatti wasn't really needed, and Brad Pitt was actually a distraction and one of the weaker actors in the film.  I'm not a fan of cameos, as they often break down the fourth wall, and I don't think they strengthened this film.  But putting that aside, the story & the way it was delivered were both gripping in a powerful way, producing a film that is one of the best you will see this year and will be well represented come March 2nd. 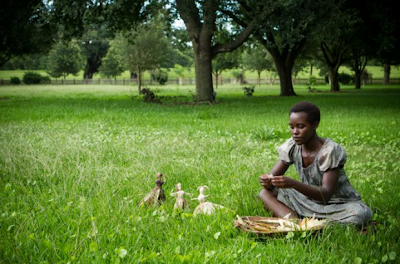