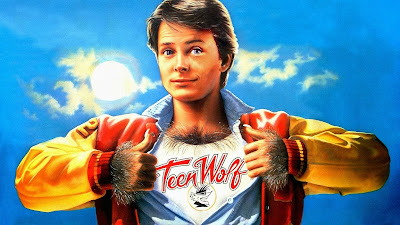 
I was 2 when this movie came out and obviously I didn't know who Michael J. Fox was, but somehow I watched his progress through stardom in the proper order.  At some point I watched reruns of Family Ties, which started in 1982, and then I became a huge fan of Back to the Future.  I also saw Teen Wolf along the way, though I remember thinking it was an adult movie, having "bad" things in it like drinking beer & kissing girls.  Watching it for the first time as a grownup, it's rated PG and of course not very risque, I still enjoyed it as much as I did as a kid, just in a different way.  Having seen so many more movies now, I was able to appreciate just how much this film pokes fun at silly sports movies, teenagers, society, you name it.  And of course, how can you not just love MJF and that adorable face?

Scott Parker is a teen who's life is going nowhere.  He gets average grades, works part-time for his dad, plays on an awful basketball team, can't get the girl of his dreams to notice him, and basically feels like there's got to be more out there somewhere.  But when things change he's not sure it's for the better.  Scottie discovers that he is a werewolf, the gene having been passed down to him from his father.  He fights to control what he sees as a curse, but soon realizes that it has its perks as well.  He's suddenly great at basketball, people are starting to notice him, and the hottie of the school wants his bod.  Things are looking up & the Wolf is becoming the big man on campus, but Scott begins to lose a little of himself in the process, understanding that it's his alter-ego people love, not who he is inside.

What a great movie.  It's ridiculous of course, but it's great.  Though the premise sounds silly, it really does make a lot of commentary on popularity, athletics, the hypocrisy of uniqueness.  And while the message is the undertone, the goofy story stays in the foreground, amusing & entertaining.  It's a quick watch & a fun way to spend some time, but it never feels like fluff.  A big part of that is MJF; no one could have pulled off this role the way he did.  There's something wonderful about him that we all love; a vulnerability, a relatability, something.  And the way he hovers between comedy & drama is pretty genius.  If you like 80s movies you've got to see Teen Wolf.  It's a staple of the genre, it's classic cinema, and it's a riot.