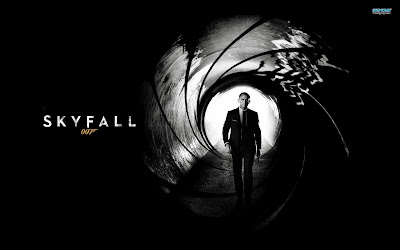 
I grew up watching Bond films all day long during marathons that gave you a great excuse not to leave the couch.  Movies like Thunderball, Diamonds Are Forever, Goldfinger, The Man with the Golden Gun; great action films with the patented one liners, cool music, and fast cars that we've come to expect from Bond.  Roger Moore was always my favorite, but I respected Sean Connery as well, and enjoyed pretty much every one in the series.  Then along came Pierce Brosnan, who took the cheese to a whole new level; Goldeneye, Tomorrow Never Dies, Die Another Day.  James Bond needed to be saved from the over-the-top blockbusters and returned to his roots.  Enter Daniel Craig.  He brought a different character to the table in Casino Royale, a darker & more troubled Bond, following that up with a mediocre action-packed Quantum of Solace.  I was ready to be done with 007, it was getting a little old, but I thought I'd give it one more shot.  And so I watched Skyfall, the best Bond movie I've ever seen.

After two long missions getting his feet wet & saving the world alongside his boss M, Bond is back in a brand new story.  The action starts early as James is on the trail of a stolen disc which contains the names of all the undercover British agents in the world.  He loses the disc, gets shot, and disappears.  But when the MI6 headquarters & M herself are attacked by a former agent, Bond steps back into the spotlight.  He's not young anymore, he can't rely on his improvisational style, but he's still the best chance England has of saving their secrets & of protecting their interests.  But the vindictive villain who has a personal vendetta against M is no easy target and has been planning his attack for years.  To defeat him, Bond will have to outsmart him, use his own passion against him, and tap into the past, however painful that might be.

Skyfall is everything that I want a Bond film to be.  It was a step up from Craig's first two: one being too dark & one being too muddled.  Director Sam Mendes kept Bond interesting while not making him tortured.  He also kept the movie action-packed while not making it silly.  There was a great balance between good story & cool fights, and that doesn't happen often.  The story was independent of others & that allowed it to go in any direction it chose; emotional, funny, touching, bloody.  And for the first time there was some homage to the old films.  We got to meet another M, Q, Moneypenny; all the characters that we love transported to the modern era and given a fresh new look.  If you like Bond movies you've got to watch Skyfall.  It is a throwback to the great ones of the past, moves past the mistakes of recent films, and establishes a foundation from which I could see multiple more movies that should be just as good as this one.