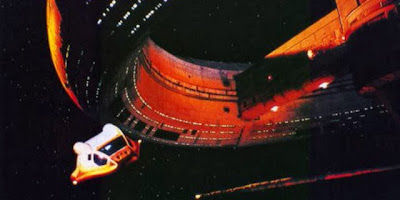 
Wow, talk about a b-movie.  A ridiculous plot, horrible acting, and what can only be described as high school drama department set pieces.  Sometimes if you add all these things together you end up with a hilariously bad film that is somehow very loveable.  And sometimes you end up with Solar Crisis.  I mean, even the name is awful; I should have known that this wouldn't be a wonderful b-movie, that it could only be a cinematic travesty.  I know that sounds harsh, and I've seen a lot of bad movies, but this is definitely one of the worst I've ever seen.  I couldn't even get past the first paragraph without saying it, it's that important that you never watch this film.

So there's this crisis, and it's solar in nature.  The sun is about to have a major flare that is directly pointed at the Earth and will evaporate the atmosphere, leaving us pretty much crisped.  But hope is not lost.  A crew of astronauts & scientists embark upon a daring mission to set off an anti-matter bomb inside the sun, diverting the flare & saving the planet.  But meanwhile, a giant American corporation is betting that the searing of the surface will actually be beneficial, that the entire world will give all its money to pay for the basic necessities that IXL Corp. has stockpiled.  Will the mission succeed and save humanity, or will the greed of one man spell doom for all mankind?

It seems impossible that a movie could be this bad.  There are seriously no redeeming qualities in it whatsoever.  The story is completely ludicrous and the science behind the plot is completely unbelievable.  The special effects are silly at best.  The entire film feels like it's being thought up on the spot & created by a dozen different incompetent writers.  And the acting, wow.  I thought with a handful of known actors that there would be some chance that the acting might be good.  But not so much.  It was like they were in a competition to see who could be more over-dramatic & horrible.  And let me tell you, they all tied for last.  I'm really surprised that this film even got off the ground and that more than two people saw it.  Yes it's that bad.  Please don't watch it.