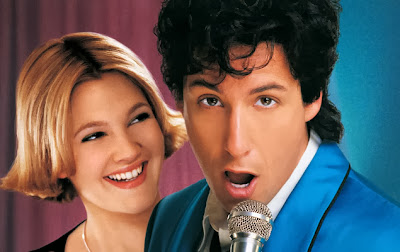 
I know some people just don't like Adam Sandler.  And, hey, I might be one of them.  I didn't really enjoy Billy Madison, Waterboy, or 50 First Dates, and those are supposed to be his funny ones.  Of course no one liked Click, Mr. Deeds, Little Nicky, or his other ridiculously stupid movies.  But on a very rare occasion he gets it right.  He did it in Punch-Drunk Love and he did it here with The Wedding Singer.  He can act a little when he chooses to, when he's not just being a moron for the hell of it, and he can bring real emotion & real humor to a character as long as it's written well.  Robbie Hart the wedding singer was a part almost tailor-made for Sandler and he pulled it off.  Maybe you don't like him, maybe you think he's hilarious, but either way this is a film worth seeing.

Robbie is obsessed with marriage.  Not only is he a wedding singer but he's been talking about getting married since he was a kid.  He wants a wife, kids, a house, love, the whole package.  The only problem is, on the day of his own wedding his fiancee doesn't show, announcing that she's not in love with him any more.  Robbie spirals downward and writes off anything to do with love, even quitting his wedding gig job.  But a special someone might change his new outlook on life.  Her name is Julia and she too is thinking about weddings.  She's getting married soon to a rich asshole name Glenn who Robbie can't stand.  And when he starts to fall for Julia things really get screwed up, as she begins to question her choices & to see Robbie in a whole new light.  Will they get together, or will true love elude them forever?

First off, Adam Sandler does a terrific job in this film.  He tones down the stupid, he shows some real emotion, and he makes Robbie believable.  Drew Barrymore on the other hand, is pretty awful.  It seems like she just read the script and is reciting the lines for the first time.  The side characters, apart from Glenn, are really bad too, although there are a few cool cameos; John Luvitz, Steve Bushemi.  But when makes this movie great is the 80s vibe.  It's not exactly a spoof, but every 80s cliche is thrown in, joked about, and make to look ridiculous.  From Flock of Seagulls to Deloreans, no funky icon is left unmolested.  So take a simple love story, set it in 80s, add in Billy Idol, create some original humor, and you've got yourself The Wedding Singer, an enjoyable experience that barely stops itself from going over the top.  It's just dumb enough to laugh at but not idiotic enough to turn us off.  Get through the first 15 minutes, which are rough, and the rest will amuse you at the very least.