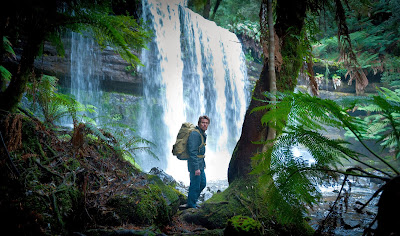 I saw a trailer for a new Jurassic Park movie the other day on YouTube.  Willem Dafoe & Sam Neill were tracking a dinosaur through the woods & being all dramatic.  Turns out it wasn't real, that it was actually a user-created trailer using scenes from The Hunter.  That worried me a little.  I had wanted to see the movie because I thought it looked interesting, but if it was fodder for a faux film then perhaps it didn't have a ton of quality.  After all, Neill isn't the greatest actor, neither is Dafoe for that matter, and a movie about the search for a Tasmanian tiger might not be that phenomenal.  Well, I'm glad I gave it a shot & watched it anyway.  It turned out to be a surprisingly simple & well-crafted movie; one that was easy to watch, easy to enjoy, and better than I expected.

Martin is a hunter, a professional & dedicated woodsmen whose preparation is only surpassed by his attention to detail.  He is a modern version of the ancient trapper and makes a living out of tracking down whatever he is hired to find.  This time an obscure company has tabbed him to find what may be an extinct animal; the Tasmanian tiger.  More myth that fact, this species holds genetic material that could be very valuable, if it still exists.  And when Martin travels to Tasmania he finds that the competition for this creature is already underway.  A local scientist who believed that the tiger was real & must be protected has gone missing in the forest, and Martin find himself right in the middle of the conflict when he lodges with the scientist's wife & children.  As he gets closer to the family & closer to the issue at hand, Martin realizes that this is no simple hunt & shoot mission, that he may be in over his head, and that he is a stranger in a strange land.

I was really taken aback by this movie.  It was like something I would have watched with my family when I was twelve; an interesting thriller with a pretty simple story that left me entertained.  That might not sound like much, but not every movie can be amazing and way too many turn out to be horrific.  So finding one that might follow the usual movie rules but turns out to be high quality is actually pretty rare.  Willem Dafoe carried the film for me, delivering a performance that surprised me as much as the movie.  He played the part with less raw emotion than we usually see from him; he was reserved, fastidious, introspective, shy even.  And it worked well for this story, one that wasn't incredibly moving or deep, but had a simplicity & an ease that was nice to watch.  With a title like The Hunter you might expect something darker, more gruesome.  But what we get is a film that is part character study, part classic story, and all well-done.