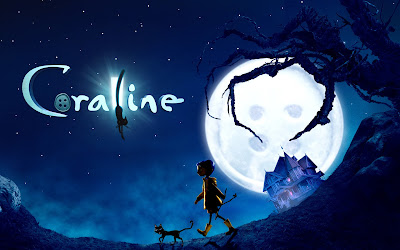 
I've never been a big animation fan.  I don't really watch that genre.  Even the dark ones that are supposed to be really good just don't do it for me.  The Nightmare Before Christmas, Corpse Bride; not horrible films, they just don't excite me.  But for some reason I saw Coraline in the theatres.  I don't even remember why, but I saw it & liked it.  Maybe it was because it surprised me, I wasn't expecting something that creepy to come from an animated movie.  But watching it a second time, I knew I wouldn't be surprised so I had to hope that the quality of the film stood up to my expectations.  It did for the most part, delivering a movie that was both scary & funny, a quality film that may not be amazing but deserves to be watched.

Coraline is a girl on the move.  Her family has just transferred from her old hometown to a strange old house broken up into apartments.  The occupants are weird as well; a pair of washed-up actresses, a Russian mouse-trainer, and a boy who lives with his landlord grandmother.  Coraline immediately dislikes her new life, resenting that her parents brought her here & never have time for her.  And so when she finds a tiny door hidden in a wall she decides to investigate, and what she finds starts a dangerous adventure.  On the other side is a mirrored world, a place where Coraline's wishes are truths; attentive parents, great food, talking cats.  But all isn't perfect.  Her "other mother" wants Coraline to stay forever and won't take no for an answer, and while Coraline is excited to visit, she soon discovers dark secrets that threaten to ruin her world.

The first time I saw it I think I liked it just a bit more than I did the second.  It's a cool movie, one that's a little scarier than you might imagine & one that's fun to watch.  Coraline is a likable heroin, well voiced by Dakota Fanning.  The "people" she meets on the other side are awesomely creepy & it's hard to shake the spooky feeling that the movie leaves.  But it's not one that I would watch over & over again.  It's a little slow in parts and you'd have to be a bigger fan of animation to enjoy the work that must have been put into the artistry of the film.  But I also can't say I didn't like it.  Coraline is a well-made movie with a cool story that's both dark & interesting.  I recommend it, but I'm not shouting its praises.